What do you look for when hiring a PM?

I was being interviewed for a new role today and one of the questions that came up was “what do you look for when hiring a new PM?”. I though I’d share my response here and get your thoughts.

I’ve hired at least 15 PMs at different levels over the years and unlike engineers who can have very common skill sets and backgrounds, I’ve found PMs can come from all different backgrounds. Some as founders, some as BAs, or developers. But the top three things I look for when hiring are:

Not a hiring manager but I’ve witnessed interviews and have been on the receiving end. +1 on being a great storyteller. I failed every single interview until I realized I was terrible at telling stories about what I’ve done in my past roles. When I brushed up, I started getting heads turned.

@NatashaMartin, Second this; I literally create a spreadsheet of stories to draw on and link to bullet points in the job listing. Works like a charm.

For each of the following, try to prepare multiple answers from your:

If I called up your teammates, how do you think they would describe you?

Excellent. Thank you for taking the time to write this up.

I think I got it here a while back, which was a resource from this site. I didn’t read the book, but that might be another good place to help you. 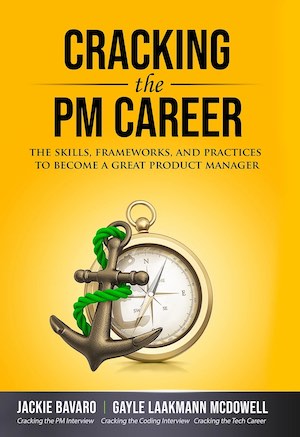 Cracking the PM Interview is a comprehensive book about landing a product management role in a startup or bigger tech company.

@RichardsonEva, I’ve read the book, it’s definitely above-average quality for an interview prep book. I also spoke with a senior PM at Facebook who said the book has “made the rounds” there and is considered pretty accurate.

I personally consider most business / career books to be hot trash, so I think it’s fair to say this one impressed me.

As someone who fell into PM, right place, right time, and the get-shit-done mentality most people have noted in this thread, I’ll definitely check out the book if I decide to progress forward in this career track.

How did you get better at story telling?

@AmyWalker, there are a lot of resources on story telling in general, but a good place to start is just focusing on speaking concisely and using a STAR-type framework to organize your thoughts. Situation, Task, Action, Result. It also sometimes good to start with a ‘nugget’ or ‘not bury the lede’, i.e., tease the outcome before you launch into the story.

I’ve hired people for software PM or PM-like roles over the past 20 years and I have to give a thumbs up to your 3 choices. The best people who have worked on my teams weren’t connected by education or background. However, they were all creative and solution oriented. They were independent but information sharers, not hoarders. They were learners, whether pursuing a degree or passionately digging into a hobby or brushing up on a second language, they saw learning as part of their lives.

There’s a person on my team now who doesn’t have a degree or a technical background but is an obsessive note-taker who reviews things until she understands them, asking lots of insightful questions. I hired her because of those questions: she can get to the core of any situation and she’s humble enough to ask for help. Mentoring her is a challenge and a pleasure, and she’s quickly untangling a particularly difficult and technical vertical. I’d hire 5 more of her.

In no particular order:

I look for things that are tough to teach, which are mostly on emotional and/or (raw) intellectual level.

Storytelling is teachable - though not easy and fast. One of my direct reports has feedback in the current cycle to improve on the storytelling part, and it will be interesting seeing how it goes.

Things I look for are clear signals of curiosity & empathy (not teachable no matter how hard you try), and a coherent structure of thoughts.

The rest is more or less teachable.

@CarlosDubois, It’s interesting that you say curiosity and empathy aren’t teachable. I kind of agree and I’m not meaning to be argumentative for the sake of it. I wonder if you could teach someone those things if you were to encourage them to approach problems from different angles/perspectives as a habit? Always encourage them to think ‘why did that happen’ and eventually you might embed that behavior in them?

I’m not responsible for hiring PMs (or anyone)

But if I was, here is what I would look for.

I would look for PMs that have some kind of deep domain knowledge. I’m in the digital space, so I would want someone with experience in design, development, analytics, or digital marketing. They don’t have to have experience in all of those areas, but at least one of them. Combine two of them and that’s going to put you ahead of the pack for me. Also, I don’t want someone that just wants to be a PM for the sake of being a PM. If they can’t tell me why their past work led them to wanting to be a PM, that’s going to be a hard pass.

Second, I want someone that is a fantastic collaborator. The work of a PM is so collaborative, I feel like you can almost get nothing done by yourself. Often you’re paving the way for others to excel. You have to be able to work with a team and influence them without pulling rank. They can’t see themselves above the team. Bonus points if they have mentored someone in the past (or can at least tell me about times they taught someone something). Are they knowledgeable AND willing to lend that to their colleagues?

Third, is the curiosity. I want someone that is a self starter. They should have a list of stuff they want to accomplish that nobody asked then to do. A lot of my best work has come from experimenting outside the bounds of what I was asked to do.

I look for a person who asks good questions in the interview and is able to articulate trade-offs clearly. The point of the interview isn’t to solve a massive problem in 10 minutes, but it’s to show that you have the ability to solve a massive problem eventually. Blathering on with tangents and awkwardly trying to tie in your past experience when it doesn’t fit is boring.

I would agree with your points. I would also vouch for a certain mindset where you solve problems wholistically rather than focusing on a part of the problem, and a heavy bias towards acting rationally rather than impulsively.

Like if someone comes up and tells me they prefer to decide things on gut feeling, I’d send them packing.

Thank you all for your insights. It was a super useful thread, and I think all the community members would find this discussion useful.