I work at a B2B Tech company in the Bay Area (Medium Prestige probably) and I take calls with recruiters from start-ups every so often. They always seem a little confused that I make so much even though I don’t think my comp is too remarkable for the Bay Area. Do people just work at startups for the lottery ticket angle? (Meaning if they could hypothetically make it big if the company went public and had a great IPO etc.)

In my experience startups also pay less with the promise or allure of other things:

@CathrynCui, not to mention equity, which it the main reason I would ever go back to another early-stage startup that I found interesting.

Literally everyone I know who has made any “real” money in tech got it through a combination of equity in early stage and sheer luck (I have screwed this up at least twice so far). IME it’s always a gamble you take for lower TC that can turn into a potential stack of cash later. You can also just get stuck in a dead-end startup with worthless equity and a low TC so YMMV.

@MariaWilson, 100%, it’s mostly luck. You also have to gamble on buying the options as well and staying until IPO, which adds to the gamble.

It becomes less of a gamble the more funding rounds that the startup has had. Know people who have done this with some success because they join at later stages and still triple their initial stock options upon IPO. Of course, this recent run of IPOs and crazy high stock valuations played a role in this too.

I’m hoping that’s the exact situation I’m in right now. Came in about year two and the valuation has double since I’ve been here. Hoping I’ll at least be able to walk away with a little cash.

I’ve faced a similar experience. Two possible reasons for this:

I think your second point becomes more and more a reality and I start to wonder if we might give, reached a tipping point where we need to look for other roles. I personally struggle to justify my crazy hours and pressure for the amount of money I make at a non FAANG, only 150k TC.

Here are some examples 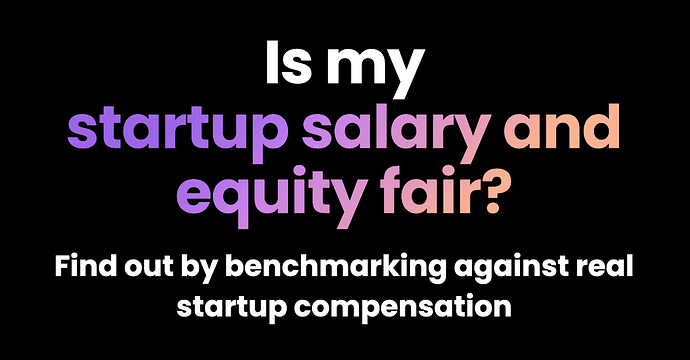 Search thousands of startup salary and equity data points. Know your market value before you negotiate your startup offer.

You will have a hard time getting that comp matched, even in the Bay Area, unless the market conditions have really moved the needle in the current hiring crunch. A FAANG would slot you into the first industry-hire level, and the base offers for PMs tend to be closer to ~200k TC prior to negotiating. The crazy compensation at FAANGs comes from stock refreshers and growth over time - the salary isn’t always particularly competitive.

Startups can often offer comparable base salary, especially if they are moving toward an exit, but your stocks are often monopoly money, or at least don’t provide the same predictable growth as FAANG stock.

“Lower-prestige” tech companies often can’t get you to 300k without a director / group PM role, which they just won’t interview an external hire with 3 YOE for.

I’m guessing that this is your second job, and you’ve gotten a promotion at this job? There’s a few “Tier 2” companies that pay high salaries and make your first few years pretty sweet, especially if you get promoted quickly. It’s only in the longer time horizon that they struggle to keep up with FAANGs since their refreshers and overall stock growth isn’t as good. But getting a FAANG to even match your comp will often take competing offers from other FAANGs.

In general, people work where they work for more reasons than compensation. E.g., Autonomy, mastery, purpose — are pretty basic core reasons why people do the things they do.

(There are other frameworks for defining why people work).

From your question - it sounds like your assumption is that people find meaning in total comp… I think this is a bad assumption. I love working at startups — love my impact / ownership / scope. I love how much you can own if you step up. I like thinking through the product strategy / working with key early customers — I think it’s much more fun to create a company and a product from scratch than to join a giant org and be a cog in a machine.

Am I working for the equity “lottery”? I treat equity as a bonus - something I should delay expectations on by several years. I’ve taken steep salary decreases to work at startups, but still expect generally competitive startup salary, knowing that the equity is a multi-year / highly risky unknown value bonus.

So, why do people work at startups / are they looking for a “lottery” / it’s really important to believe in the business you’re creating - to believe you’re delivering meaningful value at your startup that will pay in spades. But also, people work at a startup because they like the work / they make enough cash / they find meaning… startup employees do things for the same reason anyone does.

You’re pretty much guaranteed to take a short-term cash hit if you go to a startup, I’ve been facing this myself as I look at other options. Salaries top out at $250-300k maybe and that’s for fairly senior folks.

The equity is where you need to make it up. You call it the lottery ticket; I think it depends on the stage of the startup. A startup with a $1B valuation has a lot less risk, although the liquidity will take time.

I mean the trade of going to a pre-exit company has always been lower liquid comp for potential future capital gain.

An earlier stage company will likely offer liquid comp that will be lower than market rate cash comp. As the startup finds PMF and becomes a scaleup / growth stage pre-exit co then you’ll start seeing parity. By the time it’s late stage, it shouldn’t really differ to public incumbents (ofc different companies will target comp levels at different price points in the market - depending on who they’re competing against for talent). Though I wouldn’t be surprised if in this funding environment even early stage startups are starting to paying up.

Even at top paying public companies, you won’t be getting anywhere near $250k cash comp until at least L6 which, if I’m reading this correctly, is 2 levels higher than where you are. So it makes little sense for a startup to be matching what you make now. In fact, you’re already basically near the top for your level. A lot of established tech companies will pay $75k to $25k less than what you make. Only a handful will be paying closer to $300k or slightly more.

I’m in a startup with no equity, above average pay for my YoE and almost no benefits.

A recruiter is calling with Sr PM salaries for a PM role, and I am confused, could part of the TC be equity or variable bonuses?

I do like my company though, but not sure if sticking it out for them to grow is worth title bumps with small increments in TC.

On a related note, I have 2 YOE as a PM at a startup making $75K. Does this sound on par with my level and the market?

I had no competing offers so I didn’t negotiate. Probably a dumb move but I couldn’t afford to risk it. Worst case, I stay for 1 year for the resume boost and then use it as a springboard.

Yes, it’s for the lottery ticket angle. It’s not fully a lottery ticket since you’re still getting paid, and only a part of the pay gap is being compensated with equity, and there are lots of potential middle outcomes that don’t leave you empty handed.

When you negotiate compensation with a startup you should know exactly what the equity is worth. You should find out the valuation of the company and figure out what the offered equity’s value is and apply that to the pay gap. The value of that equity should make up for the lower pay.

So it’s not a total gamble, it’s a calculated risk, and it should be the same risk that the investors who put up big money took which mitigates that risk to a point, plus since you will be taking a big role in the success of the company, it’s an opportunity to convert your hard work into more money vs the fixed amount you’d be paid if you got no equity. So it depends on your personal drive. If you’re satisfied with your salary and are happy to coast then you probably shouldn’t take equity, but if you’re driven and have the bandwidth to go above and beyond the baseline requirements then equity is a way for you to get compensated for the extra work you put in since its value will be partially tied to your contributions to the company.

But make sure you do the math on the equity and make that a part of your negotiation for any pay gap. Sometimes startups don’t give that information up front, and if they’re weird about giving you that information then that’s a big red flag. If the startup/recruiter has not brought this up as a part of the negotiation to convince you their equity will be worth it in the long run then that’s weird and should be a yellow flag. They should be well aware of the trade off they’re asking you to take.

@MichaelYoffe, you’re right about the lottery aspect… options for pre-IPO companies are a big selling point. Even if the stock doesn’t skyrocket, you’re still likely getting in on the ground floor with a high chance of making some returns IF the company goes public.

Depends on the stage of the startup. Till startups raise Series A funding, salaries could be below market, and they might compensate with ESOPS. Beyond Series A, startups are where the best pays are and the best salary growth.