How would you review your poor staff performance without affecting their morale?

Becoming a product manager
career-advice, company-culture, generalist-pm
Davekim May 11, 2022, 7:33am #1

Hey everyone - wondering how people have done performance reviews:
(1) without affecting morale when their output is just low generally and doesn’t have the ability to go faster with output? Or
(2) a person has just done well and genuinely have no comments on their performance, it’s just good - I don’t want to dig for something negative when I’m just happy with them.
How would you go about these two scenarios?

Not sure I understand 1. How can their output be low, without any ability for more output?
For 2, feedback isn’t always to resolve something negative. You can almost always double down on strengths. The general approach is “You are doing a great job and consistently meet expectations. as evident by A, B, and C. Looking at your developmental goals, you could take it a step further with X, Y, or Z”.

Meaning for example (sorry wrote the above too fast), we give them the goal to write 5 posts per day but they struggle with this due to writers block, but you can see other content writers smashing through this within the team.

@Dave, No worries - that makes sense. For that, i would start by asking myself: if the writer’s block never got solved would I still want this person on my team.
If so, then I’d say this is an opportunity for growth. Ask them what they’ve tried to break through the writer’s block. Have they researched methods. Have they talked to peers. Are there any courses they’ve taken. I’d recommend they take some of these actions and set a goal to incrementally improve how much they write.
If I intend to terminate them if this behavior doesn’t change, I communicate, both verbally and in writing, that we need to work together to change this, and that you’d need to see this improve in t weeks/months. I’d ask them to come up with an action plan for what they are going to do to resolve it, and work closely with them to make sure they have the support to change it.
Regardless of which of the above, I’d spend the rest of the review making sure they know they are a valued member of the team. That the content they right is top quality, as evident by a few examples.

Okay sure, so essentially just flagging that the output is quite low and this is something that needs to be improved over time, then the key thing is to give pointers of ways they can change and improve. Then, if things don’t change over a month, it would be fair to terminate. Thanks

Hope this is helpful! One of the key things is to make sure that they are part of making the action plan, as not everyone learns in the same way. Listening to a podcast wouldn’t work for me personally, but taking an interactive course might.

Awesome! I had made the mistake of not doing performance reviews and so I got feedback that people didn’t know where they stood - with action plans that’s a great shout

Totally. One thing I find helpful was asking the person to do a self review as part of the process. That way you can see whether your feedback is a surprise or not.
Ideally, they already know the feedback that you have through your regular chats. The performance review is just a snapshot in writing.

I’m just very conscious of creating a ‘difficult culture’ if some people receive negative feedback and react badly/ get sad over their performance - it sours the mood a bit, perhaps this is just about framing constructive feedback better!

I honestly felt the same when I first became a manager. But one thing I learned really early on is that if they employee sees you as genuinely trying to help them grow, they almost always receive it in a positive way. Often they’ll thank you for the feedback.

Will definitely try it out…

Thanks for the tips… Have a great day ahead

One challenge with introducing performance reviews when they haven’t existed before is that if you’re not in a “feedback culture” then some of the feedback can come as a surprise since you’ve never discussed it before. Performance reviews should ideally be a “no surprises” summary of areas you’ve discussed in the past, but codified in writing now.
It means you have to get comfortable having feedback conversations regularly which is not an easy thing for everyone. I recommend the book Crucial Conversations as one way to learn about this.
Separately, another way to get in the habit of this is to have your team members do a monthly “top 3 / bottom 3” self evaluation and then provide your feedback on that. Three things going well, three things not going well. It’ll help them keep track of their work when it comes to perf review time and also forces a regular conversation about performance.

Performance reviews should be super boring and contain zero surprises. Ideally, it’s a box-checking exercise and a review of the year. If someone is underperforming, they should have found out long, long, long before a performance review (like by getting regular feedback during a one on one).

I think it depends on what you mean by performance reviews. If you are speaking about “official” reviews that happen once a year and affect salary, then I agree with @Zachary Cohn, there should be no surprises here. People will only be defensive if you try to give them new information in this because it will directly impact their salary/promotion. If you mean something a lot more frequent (say at least once a quarter or even half a year) and something that is not focused on compensation changes, but more focused on helping your direct reports improve - then it’s a different matter. I am a huge fan of formal, written reviews and they have worked amazingly for my team since I implemented them 3 years back - they look forward to it so much that if I am late, they remind me about the reviews. For this to work, in my humble opinion, there are important points -

The best book I have read on the subject is Andy Grove’s “High Output management” (there’s a whole chapter on performance reviews there), but I did have to adapt it to what worked for us. 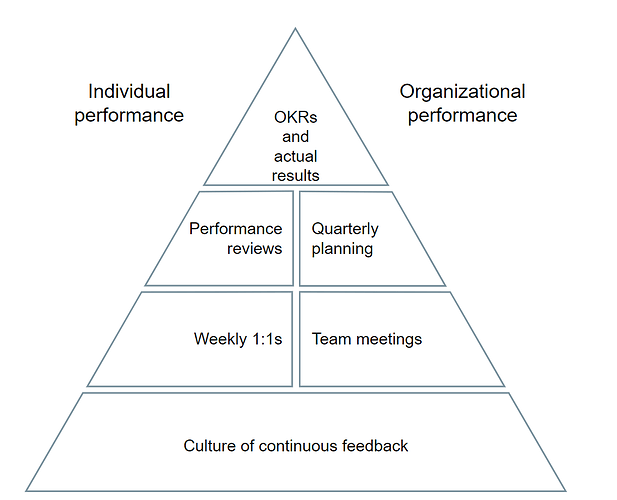 Oh yes, agree with @MarcoSilva - a manager’s initial tendency is to spend more time giving feedback to under-performers, but there is a lot more leverage in giving accurate feedback that can further push your top performers to be even better. I just don’t like the whole “review season” thing though - where most people think it is a formality. I also don’t think written reviews are just codified versions of what was already discussed in 1:1s - practically a 1-1 is a reportee’s meeting and they get to drive the agenda; and even if you give them feedback there, it could be very contextual to the stuff they are bringing to the table. A written review is an opportunity to look at it from a different, long-term, even career-oriented lens - it also forces me, as their manager to think a lot and prioritize before sharing the feedback with them (because of the “no-overwhelming-them” part). It makes me think what is not only good for the business, but also good for this individual for their own careers - regardless of where they choose to move in the future. It might be influenced by insights from 1:1, but I am often surprised by how different this is just because I am forced to write it down.

So many great advises here

Just adding that as a manager is really important to clearly state your intentions. If you’re giving someone a negative feedback, make sure you share how thoughtfully you thought about this and how much you want the other people to evolve with it. This can be done explicitly by, e.g. giving an intro to the performance review saying it won’t be positive but you’re confident this is what the other person needs to evolve, and indirectly by providing clear examples and recommendations on how to improve. Also, open the door to receive feedback yourself as a manager - “what can you do to help these people more?” is a question that the people receiving the performance review should answer.
What other people want to feel is that you care about them. Feedback is much easier to give when there’s mutual trust.

@CathrynCui, thanks! with the ‘feedback culture’, I have been giving feedback for every task, but I haven’t been doing any summary reviews or anything. So whilst there’s feedback for each task, there hasn’t been a culture of sitting down in a meeting just to discuss how they’ve been performing.

Also I’ve been exploring what kind of tasks I can give to some team members where there’s an extra hour, so I see that certain people have strengths in some areas and some don’t - but not sure whether to include this in their feedback. From reviewing copy over several months and speed of writing, I’m seeing this as more of a natural skill - so I’m not sure whether to give feedback that they aren’t so strong at it or just give them a different task. This was one of my concerns for performance reviews is just acknowledging it’s not what they’re good at - and maybe I should just give them a different task.

@PaulineFrancis, thanks! I think we’re not at the stage of doing check boxing ones, I’ve been giving feedback on an ongoing basis for each task - but have not given wholistic points for them. I heard another company does performance reviews weekly - where the manager sits them down for 10 minutes and goes through their performance for the week. I would think this is too much, however, I do need to implement some form of formal one.

@NatashaMartin, Thanks! Agreed: You have to genuinely do the review to help the person do better. And it almost always takes more than 1 month to show major improvements - if you think that you’re going to fire the person in a month if they don’t improve, you might as well fire them right away.
My whole team is stellar - but there was one person that was consistently slower in every task or just ‘understanding’ the main objectives - I gave her couple of months for improvement because her quality of work was high but it was just really slow. I didn’t know how to communicate that she is really slow without putting huge pressure because technically she’s below 50% of the expectations I had in targets. So if I had let her know the figure, I would have thought this would place a huge pressure

. She was quite upset that she didn’t know this - and I realized I handled this wrongly in hindsight. I wanted to wait a couple of months and let her do what she would naturally do without artificial pressure - > to see what she naturally could perform at → is this not recommended? This method meant that I couldn’t give real feedback on being 50% too slow.
Will check at Andy Groves’ book thank you